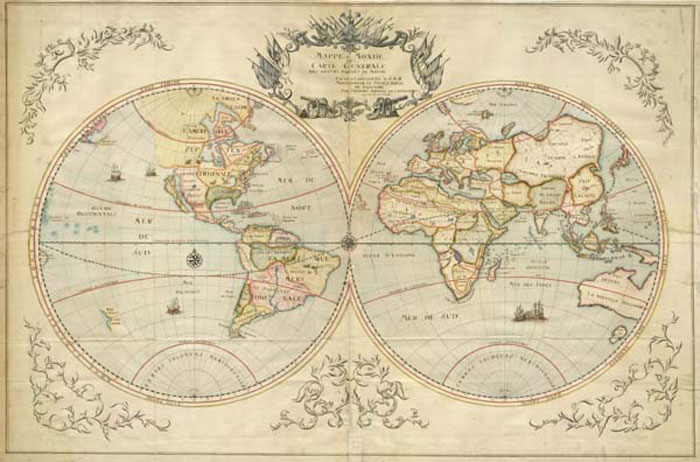 Yup, you read correct. Geography has formulas and some of them are really awesome!

Clairaut’s theorem is a general mathematical law applying to spheroids of revolution. The formula can be used to relate the gravity at any point on the Earth’s surface to the position of that point, allowing the ellipticity of the Earth to be calculated from measurements of gravity at different latitudes. Clairaut’s formula is giving the acceleration due to gravity g on the surface of a spheroid at latitude φ. Apart from geography It is also used a lot in astrodynamics.

2. Geocentric radius of the Earth

The twin brother of the previous equation. Both Lambert cylindrical equal-area projection formulas, like any cylindrical projection, they stretch parallels increasingly away from the equator. The poles accrue infinite distortion, becoming lines instead of points.

Surface runoff is the water flow that occurs when the soil is infiltrated to full capacity and excess water from rain. The runoff curve number (also called a curve number or simply CN) is an empirical parameter used in hydrology for predicting direct runoff or infiltration from rainfall excess. CN has a range from 30 to 100. Lower numbers indicate low runoff potential while larger numbers are for increasing runoff potential. The lower the curve number, the more permeable the soil is. This formula is also used in Fluid dynamics, geology and mechanical engineering.

Calculates the standard deviation (SD) of a series of numbers (x).
It is also used in statistics, where it is a measure that is used to quantify the amount of variation or dispersion of a set of data values. The standard deviation of a random variable, statistical population, data set, or probability distribution is the square root of its variance. All these as you already got, are super useful in geography, just like the next equation.

Arithmetic mean is the sum of a collection of numbers divided by the number of numbers in the collection. The collection is often a set of results of an experiment, or a set of results from a survey and it is used a lot in Geography as well. The arithmetic mean is the measure of the central tendency of a probability distribution or of the random variable characterized by that distribution.

8. Variance (regarding to the arithmetic mean)

Completing the set of Statistic related geography formulas, we introduce variance. The variance measures how far a set of numbers of n equally likely values is spread out. A small variance indicates that the data tend to be very close to the mean (expected value) and hence to each other, while a high variance indicates that the data are very spread out around the mean and from each other.