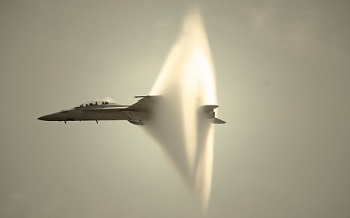 A sonic boom is the sound associated with the shock waves created by an object traveling through the air faster than the speed of sound. Also, it’s Guile’s signature special attack in Street Fighter (hold away – Towards + Punch).
The most known sonic boom, is the one that Supersonic Aircrafts produce. When the aircraft ...