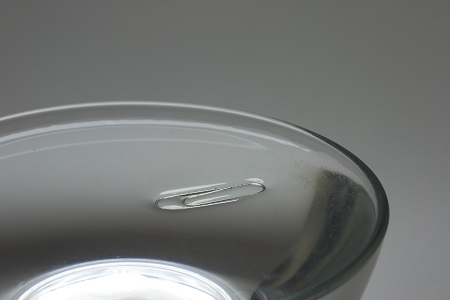 Earlier this week we talked about Capillary action and how it is applied in the “scientifically crafted” Space Glass of Ballantine’s.
Let’s talk about Surface tension in order to land on capillarity.
It is the elastic tendency of liquids which makes them acquire the least surface area possible. Surface tension is an important property that markedly influences many ecosystems. It is responsible, for example, when an object or insect (e.g. water striders) that is denser than water is able to float or run along the water surface. At liquid-air interfaces, surface tension results from the greater attraction of water molecules to each other (due to cohesion) than to the molecules in the air (due to adhesion). The net effect is an inward force at its surface that causes water to behave as if its surface were covered with a stretched elastic membrane. Because of the relatively high attraction of water molecules for each other, water has a high surface tension compared to that of most other liquids. Surface tension is an important factor in the phenomenon of capillarity.

If a tube is sufficiently narrow and the liquid adhesion to its walls is sufficiently strong, surface tension can draw liquid up the tube in a phenomenon known as capillary action. The height to which the column is lifted is related to the density of the liquid, the liquid-air surface tension, the radius of the capillary and the angle of contact. If contact angle is greater than 90°, as with mercury in a glass container, the liquid will be depressed rather than lifted.

The height to which the column is lifted (h in meters), is given by the formula above.
γι  is the liguid-air surface tension (N/m), θ is the angle of contact (in degrees), ρ the density of the liquid (kg/m3), g the standard gravity and r the radius of the capillary in meters.
On the left you can see a diagram of a mercury barometer.

Now go and try using fxSolver, and solve all the Capillary Action formulas.
Also, remember to follow our social media pages, by hitting the buttons below and watch the fxSolver video as well!

Laser Cutting and the Gaussian beam

Capillary Action - height of the meniscus