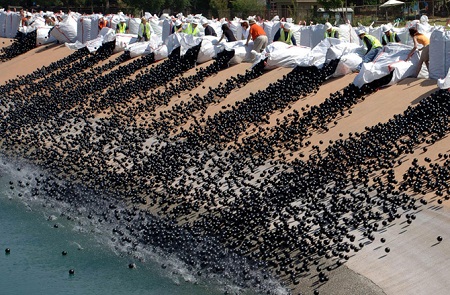 These days California faces a very long drought , which makes people worry about their liquid future. The local government has to come up with solutions regarding the matter.
Apart from the lack of rain, they have to face Vaporization. One of the great enemies of mankind when it comes to drought.
Vaporization of an element or compound is a phase transition from the liquid phase to vapor. There are two types of vaporization: evaporation and boiling. In California they deal with evaporation obviously.

Evaporation is a phase transition from the liquid phase to vapor (a state of substance below critical temperature and critical pressure) that occurs at temperatures below the boiling temperature at a given pressure. Evaporation usually occurs on the surface. Evaporation may occur when the partial pressure of vapor of a substance is less than the equilibrium vapour pressure.
To deal with this matter, local government came up with the idea of Shade Balls.
It is quite simple and genius. They covered the water reservoir with 96 million black plastic balls that float on the surface of it.
That measure prevents evaporation by 85 to 90%, and also protects the water from other “bad stuff” such as bird feces, algae and dust.

In fxSolver, you can find and solve the “Latent Heat” formula.
Latent heat is the energy released or absorbed by a body or a thermodynamic system during a constant-temperature process. A typical example is a change of state of matter, meaning a phase transition such as the melting of ice or the boiling of water. A specific latent heat (L in kJ/kg) expresses the amount of energy in the form of heat (Q in kJ) required to completely effect a phase change of a unit of mass (m in kg), usually 1kg, of a substance as an intensive property. Intensive properties are material characteristics and are not dependent on the size or extent of the sample. The latent heat for a given mass of a substance is calculated by the mass of the substance and the specific latent heat for the particular substance.

As always, you can try using fxSolver, with “Latent Heat” equation.
Please, remember to follow our social media pages, by hitting the buttons below and watch the fxSolver video as well!