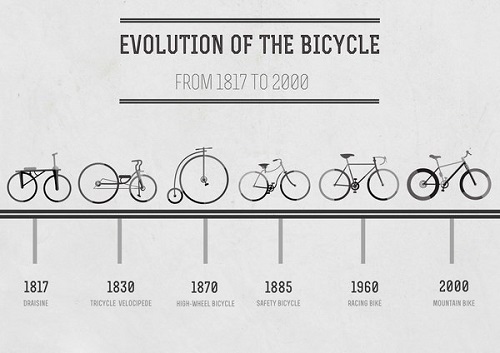 Since the bicycle was invented, scientists have postulated various reasons as to why a bicycle is self stable above a certain speed. The consensus has been that a bicycle’s stability is related to two factors: First, the rotating wheels of the bicycle provide stability through gyroscopic effects. Secondly, that the ‘trail’ plays an important part.

Trail is the distance that the front wheel ground contact point trails behind the steering axis ground contact point. Trail is a function of head angle, fork offset or rake, and wheel size. Trail can be increased by increasing the wheel size, decreasing or slackening the head angle, or decreasing the fork rake. All these are expressed in this formula:

The more trail a traditional bike has, the more stable it feels,although too much trail can make a bike feel difficult to steer. Bikes with negative trail (where the contact patch is in front of where the steering axis intersects the ground), while still ridable, are reported to feel very unstable. Normally, road racing bicycles have more trail than touring bikes but less than mountain bikes. Mountain bikes are designed with reduced head angles than road bikes to improve stability for descents, and therefore have greater trail. Touring bikes are built with small trail to allow the rider to control a bike weighed down with baggage. As a consequence, an unloaded touring bike can feel unstable. In bicycles, fork rake, often a curve in the fork blades forward of the steering axis, is used to diminish trail. Bikes with negative trail exist, such as the Python Lowracer, and are ridable, and an experimental bike with negative trail has been shown to be self-stable.
The video below will help you visualize some of the above information and help you comprehend more about the matter.

Nevertheless we can say that bicycle is a “Shoot first, ask questions later” invention.

As always, you can try using fxSolver, with the Trail formula in our database.
Please, remember to follow our social media pages, by hitting the buttons below and watch the fxSolver video as well!