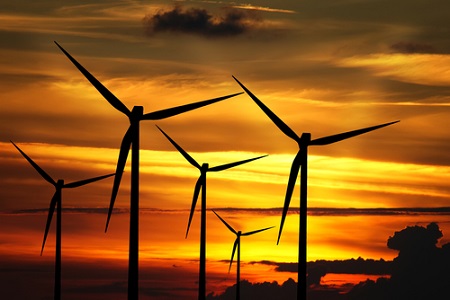 Wind is the movement of air from an area of high pressure to an area of low pressure. In fact, wind exists because the sun unevenly heats the surface of the Earth. As hot air rises, cooler air moves in to fill the void. As long as the sun shines, the wind will blow. And since people found out how to harness wind, they will try to do so as long as it blows.
Mariners, capture the wind and make it push them forward, farmers build windmills to make the wind grind their grains and pump water on their behalf. These are old school methods of mechanical power production. Lately, people extract electrical power from airflow, using wind turbines. And that’s good! Wind power as an alternative to fossil fuels, is plentiful, renewable, widely distributed, clean, produces no greenhouse gas emissions during operation, and uses little land. The net effects on the environment are generally less problematic than those from nonrenewable power sources.

There is a formula that calculates the power produced by a wind turbine.

But as always, this clean and limitless power source, has its risks. Birds of prey are vulnerable, since they hunt in open plains, just like the areas the wind turbines are installed. From a distance, the blades seem to move slowly, but the tip speed of the turbines can approach 200 miles/h, creating deadly obstacles for the birds.
People are also in danger. Think one of these huge blades, flying towards you after it is detached from the turbine due to a malfunction, and you will understand. Yes, it is rare these days thanks to design improvements but it is still terrifying. Also, wind farms that operate in cold climates are also susceptible to ice formation. Accumulating ice, apart from destroying the turbine, can be thrown as a projectile, potentially endangering surrounding people.

As always, you can try using fxSolver, with the Wind Power equation in our database.

Please, remember to follow our social media pages, by hitting the buttons below and watch the fxSolver video as well!