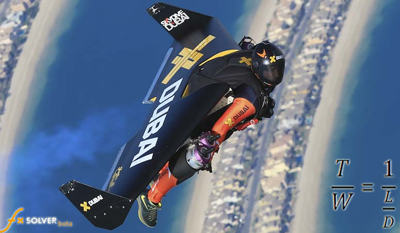 Lately, there is a hype about two guys flying above Dubai. An eleven minute epic video is all over the internet, showing their flight skills. Oh wait! Did you think they fly airplanes? No no! They are using Jetpacks. Yes! Jetpacks. Boba Fett like Jetpacks!

The video has plenty of beautiful HD footage shot from a chase plane and the GoPros attached to Yves Rossy and his wingman, Vince Reffet.
Rossy, is not a freshman in the Jetpack community (Yes, it is a small community, but still a community). He developed and built a wing-suit system comprising a backpack equipped with semi-rigid aeroplane-type carbon-fiber wings—with a span of about 2.4 metres (7.9 ft)—powered by four Jet-Cat P200 jet engines modified from large kerosene-fueled model aircraft engines.
Vince Reffet is a well-known name in the world of skydiving and comes from a family of skydivers. He has achieved extraordinary, gravity-defying feats including a record-breaking BASE0jump from the world’s tallest building – Dubai’s Burj Khalifa – as well as a jump from 10,000 metres over Mont Blanc in France.
Since you are in fxSolvers blog, you will not leave empty handed.
I found in our database, the most basic equation for this kind of stuff.
The formula that helps us determine the Thrust to weight ratio, of rockets, jet engines, propeller engines, and… Jetpacks!

Don’t forget, that you can Add the equation to the fxSolver and get one step closer to aviation, with just a few clicks!
If you want to read more about Jetpacks, here is a Brief History of them, by Novascientia’s blog.

Also, remember to follow our social media pages, by hitting the buttons below!