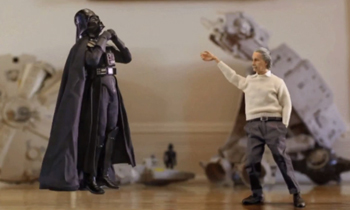 This is the post you were waiting for.
The most Quoted formula of all time.
The Darth Vader of equations.
No it’s not a big, bad lightsaber wielder.
Just as Darth Vader, with his black mask and the strange voice, is the archetypal bad guy in popular culture, so this equation is the archetypal… equation.

I mean it is everywhere. Cups, t-shirts, posters, in every conversation where someone tries to mention something incomprehensive. But, you will see. It’s not that hard to understand!

Relativity theory is in da house!

What does it say?
Matter contains energy equal to its mass multiplied by the square of the speed of light.

Why is that important?
The speed of light is huge and its square is absolutely humongous. One kilogram of matter would release about 40%of the energy in the largest nuclear weapon ever exploded. It’s part of a package of equations that changed our view of space, time, matter, and gravity.

What did it lead to?
Radical new physics, definitely. Nuclear weapons… well, just maybe – though not as directly or conclusively as the urban myths claim. Black holes, the Big Bang, GPS and Satellite navigation.

It is widely believed that the equation led to the invention of nuclear weapons, that it comes from Einstein’s theory of relativity, and that this theory (obviously) has something to do with various things being relative. In fact, many college guys seductively state “everything is relative” to the ear of their potential girlfriend, and think it has something to do with Einstein.

“Einstein named his theory “relativity” because it was a modification of the rules for relative motion that had traditionally been used in Newtonian mechanics, where motion is relative, depending in a very simple and intuitive way on the frame of reference in which it is observed”, wrote Ian Stewart in his book “In pursuit of the Unknown.”

He continues, “Einstein had to tweak Newtonian relativity to make sense of a baffling experimental discovery: that one particular physical phenomenon is not relative at all, but absolute. From this he derived a new kind of physics in which objects shrink when they move very fast, time slows to a crawl, and mass increases without limit. An extension incorporating gravity has given us the best understanding we yet have of the origins of the universe and the structure of the cosmos. It is based on the idea that space and time can be curved.”

“Relativity is real. The Global Positioning System (GPS, used among other things for car satnav) works only when corrections are made for relativistic effects. The same goes for particle accelerators such as the Large Hadron Collider, currently searching for the Higgs boson, thought to be the origin of mass.”

As always, you can play using fxSolver, with the “Mass-energy equivalence” equation in our database.

Please, remember to follow our social media pages, by hitting the buttons below!