Optimum HDTV viewing distance is the distance that provides the viewer with the optimum immersive visual HDTV experience. Although opinions vary on the exact screen size to distance relationship, formal research and recommendations suggest closer is preferred to farther, to provide a more immersive experience.

HDTV is designed to provide an experience more realistic than the television system it is designed to replace. The “thrilling realism” HDTV attempts to offer arises from increased resolution (detail) and the typically large screen sizes. A larger display increases the visual angle at which content is viewed, both of which contribute to an increased feeling of presence. Thus, correct viewing distance is critical to the enjoyment of HDTV as it is intended. While helping to define the HDTV standard, RCA engineer (and later vice-president) Bernard J. Lechner did an early analysis of viewing distance under various conditions, deriving the so-called Lechner distance.

With printed graphics, resolution refers to the number of pixels (usually referred to as “dots”) in a fixed linear measurement. With HDTV, resolution is measured in terms of the number of pixels in the physical display. When the resolution of a printed image is increased, the image is cleaner, crisper and more detailed. However, image quality does not improve if the increase in resolution exceeds the observer’s visual capabilities. For a HDTV’s image to noticeably improve, its resolution per degree of arc (or angular resolution) must increase as well as the pixel count of the display.

The human visual system has a fixed capacity to detect detail from a distance. Our understanding of limitations with regard to visual detail recognition and identification from a distance is primarily based on the work of Dr. Hermann Snellen. Dr. Snellen developed the eye examination chart that bears his name (Snellen chart). From his findings and the work of others over the last hundred years, one arcminute is seen as the threshold beyond which critical detail cannot be identified, by a person with normal vision. An arcminute is an angular measurement, which is equal to 1/60 of one degree of a circle. Normal vision is referenced as 20/20 or 6/6 vision in North America and Europe respectively. The visual acuity threshold has been identified as a constraint factor in the recommendations on the optimum viewing distance for HDTV, and also in formal research that comment on the subject of television and angular resolution. Assuming display is flat, with 1 arcminute as the constraint for seeing critical detail, in order not to miss any detail a viewer would need to be situated at a position where their view angle to a 1080p HDTV is approximately 31.2 degrees or greater (32 degrees for spherical display), for 2160p HDTV approximately 58.37 degrees or greater (64 degrees for spherical display) and for 4320p HDTV approximately 96.33 degrees or greater (128 degrees for spherical display). However, there is not always agreement that the Snellenian limit should be the constraining factor.

To calculate the viewing distance, based on display size and content resolution, the formula shown here may be used. 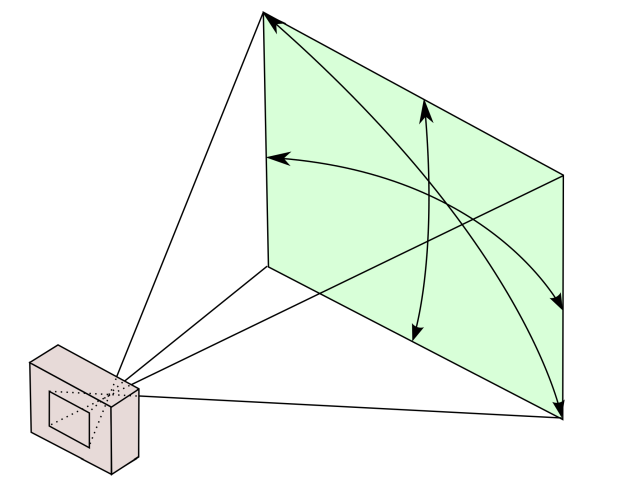