Height of a trapezoid in relation with the sides

Trapezoid is a convex quadrilateral with only one pair of parallel sides. The parallel sides are called the bases of the trapezoid and the other two sides are called the legs or the lateral sides. The height (or altitude) is the perpendicular distance between the bases. In the case that the two bases have different lengths (a ≠ b), the height of a trapezoid h can be determined by the length of its four sides usinfg the formula shown here.

The term trapezium has been in use in English since 1570, from Late Latin trapezium, from Greek τραπέζιον (trapézion), literally “a little table”, a diminutive of τράπεζα (trápeza), “a table”, itself from τετράς (tetrás), “four” + πέζα (péza), “a foot; end, border, edge”.

The first recorded use of the Greek word translated trapezoid (τραπεζοειδή, trapezoeidé, “table-like”) was by Marinus Proclus (412 to 485 AD) in his Commentary on the first book of Euclid’s Elements.

This article uses the term trapezoid in the sense that is current in the United States and Canada. In many other languages using a word derived from the Greek for this figure, the form closest to trapezium (e.g. Portuguese trapézio, French trapèze, Italian trapezio, Spanish trapecio, German Trapez, Russian “трапеция”) is used.

The term trapezoid was once defined as a quadrilateral without any parallel sides in Britain and elsewhere. (The Oxford English Dictionary says “Often called by English writers in the 19th century”.) According to the Oxford English Dictionary, the sense of a figure with no sides parallel is the meaning for which Proclus introduced the term “trapezoid”. This is retained in the French trapézoïde , German Trapezoid, and in other languages. However, this particular sense is considered obsolete.

A trapezium in Proclus’ sense is a quadrilateral having one pair of its opposite sides parallel. This was the specific sense in England in 17th and 18th centuries, and again the prevalent one in recent use outside North America. A trapezium as any quadrilateral more general than a parallelogram is the sense of the term in Euclid. 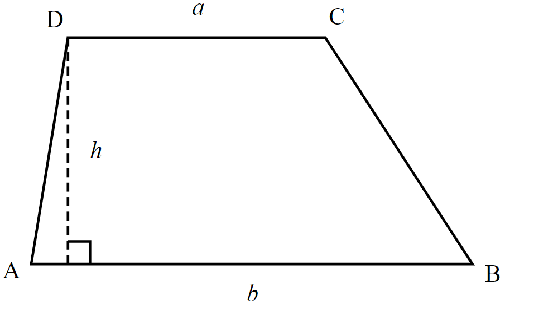