An epicyclic gear train consists of two gears mounted so that the center of one gear revolves around the center of the other. A carrier connects the centers of the two gears and rotates to carry one gear, called the planet gear, around the other, called the sun gear. The planet and sun gears mesh so that their pitch circles roll without slip. A point on the pitch circle of the planet gear traces an epicycloid curve. In this simplified case, the sun gear is fixed and the planetary gear(s) roll around the sun gear. Typically, the planet gears are mounted on a movable arm or carrier which itself may rotate relative to the sun gear.
The three basic components of the epicyclic gear are:
Sun: The central gear
Planet carrier: Holds one or more peripheral planet gears, all of the same size, meshed with the sun gear
Annulus: An outer ring with inward-facing teeth that mesh with the planet gear or gears.
The overall gear ratio of a simple planetary gearset can be reliably calculated using the angular velocity of the Annulus, Sun Gear and Planet Carrier and the number of teeth of the Annulus and Sun Gear. 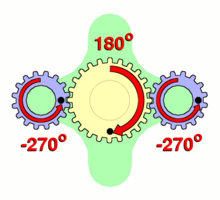