The variance measures how far a set of numbers of n equally likely values is spread out. A small variance indicates that the data tend to be very close to ... more

Calculates the arithmetic mean size (arithmetic method of moments) of the particles’ size distribution of a soil, in metric scale. In statistics, the ... more

The Heronian mean of two non-negative real numbers is a weighted mean of their arithmetic and geometric means.The weighted mean is similar to an ... more

In mathematics, the geometric mean is a type of mean or average, which indicates the central tendency or typical value of a set of numbers by using the ... more

The weighted mean is similar to an arithmetic mean (the most common type of average), where instead of each of the data points contributing equally to the ... more

The awe‐inspiring Great Pyramid of Cheops was built more than 4500 years ago. Its square base, originally 230 m on a side, covered 13.1 acres, and it was 146 m high (H), with a mass of about 7×10^9 kg. (The pyramid’s dimensions are slightly different today due to quarrying and some sagging). Historians estimate that 20,000 workers spent 20 years to construct it, working 12-hour days, 330 days per year. 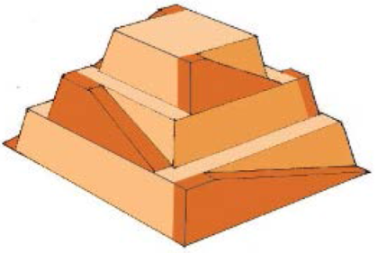 a) Calculate the gravitational potential energy stored in the pyramid, given its center of mass is at one-fourth its height.

b) Only a fraction of the workers lifted blocks; most were involved in support services such as building ramps, bringing food and water, and hauling blocks to the site. Calculate the efficiency of the workers who did the lifting, assuming there were 1000 of them and they consumed food energy at the rate of 300 Kcal/hour.

first we calculate the number of hours worked per year.

then we calculate the number of hours worked in the 20 years.

The efficiency is the resulting potential energy divided by the consumed energy.

In mathematics, generalised means are a family of functions for aggregating sets of numbers, that include as special cases the arithmetic, geometric, and ... more

Compound annual growth rate is a business and investing specific term for the geometric progression ratio that provides a constant rate of return over the ... more