Calculate the change in length of the upper leg bone (the femur) when a 70.0 kg man supports 62.0 kg of his mass on it, assuming the bone to be equivalent to a uniform rod that is 45.0 cm long and 2.00 cm in radius.

The force is equal to the weight supported:

and the cross-sectional area of the upper leg bone(femur) is:

This small change in length seems reasonable, consistent with our experience that bones are rigid. In fact, even the rather large forces encountered during strenuous physical activity do not compress or bend bones by large amounts. Although bone is rigid compared with fat or muscle, several of the substances listed in Table 5.3(see reference below) have larger values of Young’s modulus Y . In other words, they are more rigid.

Shear stress,is defined as the component of stress coplanar with a material cross section. The average shear stress is force per unit area. Beam shear is ... more

Pressure (symbol: p or P) is the ratio of force to the area over which that force is distributed.

Pressure is force per unit area applied in a ... more 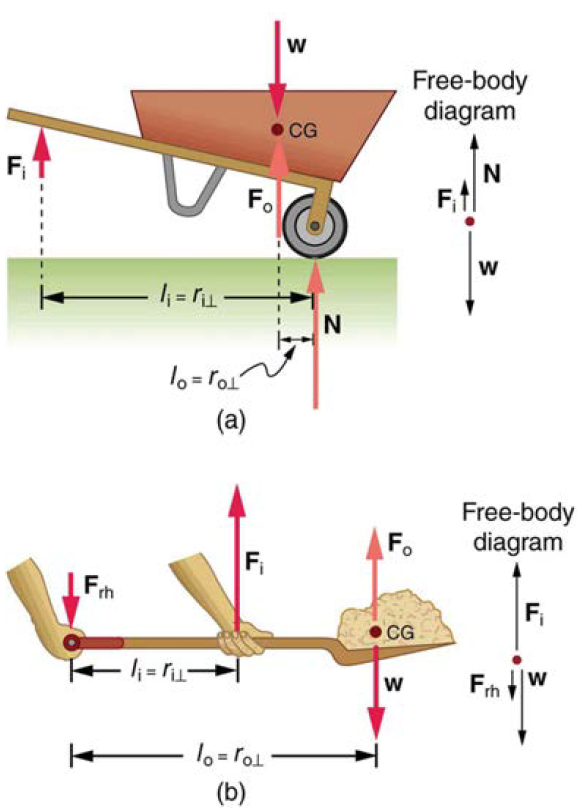 Here, we use the concept of mechanical advantage.

Discussion
An even longer handle would reduce the force needed to lift the load. The MA here is:

Block and tackle - effort required to raise a given weight

A block and tackle is a system of two or more pulleys with a rope or cable threaded between them, usually used to lift or pull heavy loads.The formula used ... more

Contact mechanics is the study of the deformation of solids that touch each other at one or more points. Hertzian contact stress refers to the localized ... more

Stress is a physical quantity that expresses the internal forces that neighboring particles of a continuous material exert on each other. Any strain ... more

In aerodynamics, wing loading is the total weight of an aircraft divided by the area of its wing. The stalling speed of an aircraft in straight, level ... more